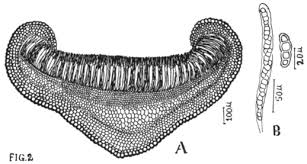 Hysterium — or hysterium pulicare to be more exact — is the poorly known saprobic species depicted on this issue's cover. Its name refers not to its poisonous or hallocinogenic qualities (it has none), but rather to its hysterothecium, an elongated sexual structure that opens via a longitudinal slit surrounded by swollen lips. Spore-laden juices seep from this slit and are responsible for producing baby hysteria.

We hope our latest issue will provoke feelings of hysteria in you, dear readers.

The word's ancient Greek origins (from hystera, or womb) suggest the wandering womb theory of feminine illness, and stories like Nuria Labari's "Not Even Goodbye" (translated from the Spanish by Catherine Nelson), as well as Fahmida Riaz's poems "Plaything" and "War Cry for a Young Woman" (translated from the Urdu by Amna Chaudry) evoke the suffering with which women, in particular, have been credited for centuries.

But this issue's impressive emotive scope, with its tragedies of personal and political range, sees hysteria trespassing beyond its traditionally woman-identified space. Carlos Fuentes' "Litany," for example (translated from the Spanish by Jeff Barnett), features a surreal, beautiful effusion — an orchid borne of the body — that turns ugly and impales itself. And Fernando Sorrentino's playfully sinister story "Re-Entry into Society" (translated from the Spanish by Mary Esther Diaz) explores a precise and bureaucratic delirium.

Reading through the issue, it becomes clear hysteria evokes a general sense of unmanageable emotional excess. And we have gathered here stories dealing with a wide spectrum of emotional reactions that might overcome anyone, anywhere — strangeness of circumstance aside. Though we associate hysteria with surplus and exorbitance, reading this issue, we discover the human essential is, indeed, excessive.

In this issue we are also pleased to introduce artwork from local and regional Iowa artists not only on our cover, but throughout the issue. Sincere thanks to Benjamin Chait of The Chait Galleries Downtown for facilitating the selection process and to the following artists, who granted permission to reproduce images of their work:

And special thanks to Frances Cannon for our cover art.